Exercise and Your memory

Are you making a New Year's Resolution to get more exercise next year?  According to the  American Academy of Neurology you may be helping your memory especially if you have mild cognitive impairment (MCI).   These scientists say that exercising twice per week is beneficial and helps retain memory and thinking abilities in persons with MCI.

Unlike dementia MCI does not affect the ability to cope with routine acts of daily living like getting dressed, eating and bathing.  People with MCI have trouble remembering things like appointments, where they put their car keys, cell phone or what did they come into this room for?

Doctors are wanting patients to slow the advance of MCI as it is sometimes, but not always,  a precursor to Alzheimer's.  Since there are no sure treatments for Alzheimer's doctors are eager for patients to do everything they can to slow its progression.

It is recommended in a report in the journal Neurology that persons with MCI get exercise at least twice per week. 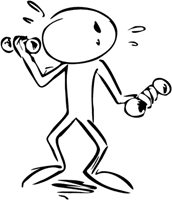 While it hasn't been proven that excise is beneficial in this regard the experts claim that you can't medicate yourself to better health.  Besides, exercise has general health benefits at little risk.
Sometimes the symptoms of MCI can lessen with taking fewer medications as cognitive issues can be a side effect of some medications.
No specific kinds of exercise were recommended for MCI but it is suggested that aerobic exercise and resistance training can be helpful.