Why Does the Press Hate Melania?

I really can't understand the hatefulness of the media and the rest of the Left toward Mrs. Trump.   Melania is the most beautiful, graceful and intelligent First lady since Jackie Kennedy.  Did they malign Jackie Kennedy?  NO, of course not!  She was married to a Democrat. 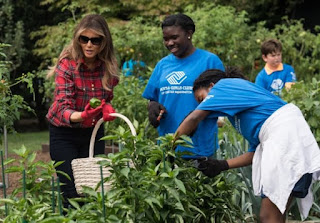 You may dislike or even hate President Trump but why take it out on his wife?  She is a First lady that any nation can be proud of. She has done some of the very same kind  things for children that Michelle Obama did.  For these very same acts Michelle Obama was highly praised while  Melania was unfairly criticized.

While President Trump was being labeled a bully, his wife was fighting against bullying at a Detroit school. She told the students,  “I think it’s important that we choose kindness and compassion”.

She told them,  “I encourage you to find a new friend,  ask them what they like, what their hobbies are, so nobody becomes sad or stressed and everybody feels included.”

Melania has chosen to make the fight against bullying a priority as First Lady.

I wonder how many of those people who are downgrading Melania Trump can speak five languages as she does.
I'm proud of her.  How about you?