As he signed the tax bill president Trump mentioned the need for improvement of our infrastructure.  But will it get done? 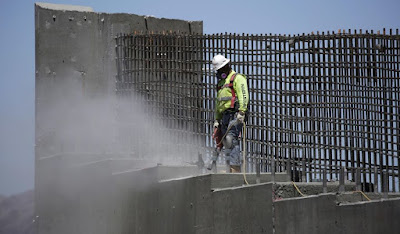 Senate  Majority leader Mitch McConnell seems to want to focus on Dodd-Frank reform law and illegal immigrant Dreamers.
House Speaker Paul Ryan wants to reform entitlements and Mr. McConnell is reluctant to deal with those issues without Democrat input.
But President Trump says, "It's time to rebuild our country.  Infrastructure is by far the easiest: People want it, Republicans and Democrats. We’re going to have tremendous Democrat support on infrastructure. I actually wanted to save the easy one for the one down the road. So we’ll be having that done pretty quickly.”
But Democrats claim that Republicans blew the needed funds on the tax bill.
Marc Short, White House legislative affairs director said that Trump can get the job done only if the democrats work with the Republicans.  Said Mr. Short to Fox News Sunday.   “The big question is, will Democrats put politics aside and work with us?”
While the parties are bantering back and forth the Republican lawmakers can't even seem to agree on what is most important.  Do we wait for another bridge to fall?