A year round resident at Willapa Wildlife Refuge at the north end of the Long Beach Peninsula in Washington State is the Pileated Woodpecker.   This large bird is the size of a crow and can be seen in deciduous forests of eastern North America, the frosty forests of Canada and parts of the Pacific Coast.

The bird has a prominent red crest, thus the name pileated which comes from the Latin pileatus meaning "capped". 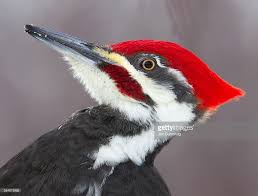 The bird has a call similar to the northern flicker which is a far-carrying laugh often described as a "jungle bird" call.  The pileated woodpecker prefers mature forests with large mature hardwood trees. But they can be seen in smaller woodlots that contain tall trees.  Their diet consists mainly of insects, especially carpenter ants.  Fruits, nuts, and berries, including poison ivy berries are also on the menu.  The woodpecker will sometimes be seen foraging around  homes or cars.  One might also be attracted by suet-type feeders especially during harsh weather. 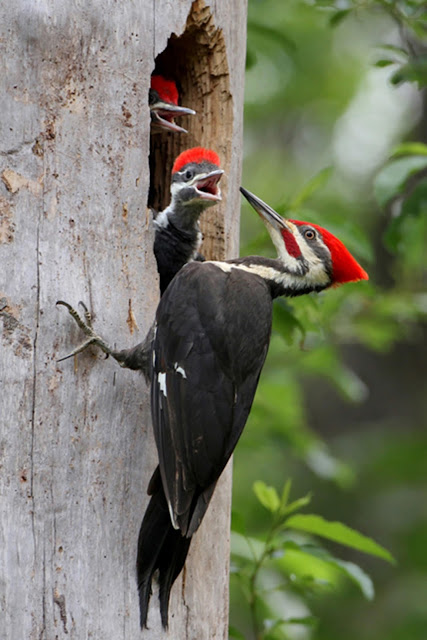 These birds make their nests in holes that they drill in dead trees.  They have been known to make such large holes that the tree breaks in half.  They raise their young every year in these holes.   In April the male drills a hole and attracts a female for mating and there they raise their young.  Once the young are raised they abandon the holes and do not use them again.  Other birds an d even some mammals such as raccoons may use them.  That is a male Pileated Woodpecker feeding its young.  The red strip extending from the beak straight back under the eye is black in the female.

The pair is not migratory.  They stay together on the same territory and will defend this territory year round.  They often make quite a racket when they do.  Both parents sit on three to five eggs for 12 to 16 days to hatch the young. 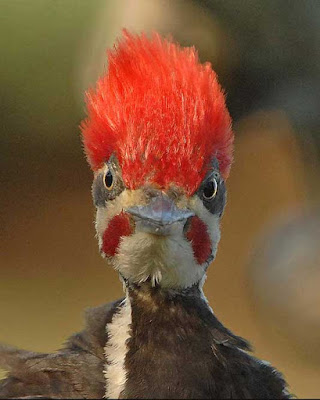 The pileated woodpecker can be considered both helpful and harmful  to humans as they control the populations of tree beetles and other insects.  But they are deemed to be harmful if found on some properties because of the damage they can do to trees and homes.

So, you bird watchers, take your cameras and binoculars to Willapa Wildlife Refuge  and watch the show. 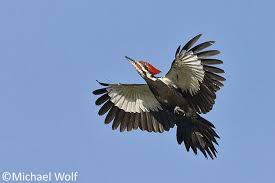