From Burning Trees To a Lighthouse

Cape Disappointment Lighthouse is located at the north side of the mouth of the Columbia River near Ilwaco, Washington 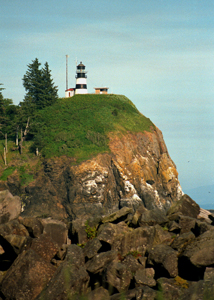 The Columbia drains a watershed area of about 259.000 square miles. The force of this great river meets the Pacific Ocean's massive mix of shifting channels, violent seas and high winds making for extremely dangerous navigation. Also, despite its wide mouth, mariners, historically, were often unable to find it.About 1812 a beacon was erected on top of the 700 foot cape by Hudson's Bay Company employees in order to assist the Beaver ( the company ship) in finding the entrance to the Columbia River. They raised a flag and set trees on fire as a makeshift lighthouse.As time went on the traffic on the northwest coast increased and the U. S. Coast Survey recommended the building of lighthouses at Cape Disappointment at the mouth of the Columbia River and and Cape Flattery at the entrance to Puget Sound. This was about 1850.The commander of the U. S. Surveying Schooner Ewing spoke out about the urgency of a light at the mouth of the Columbia River saying, "The greatly increasing commerce of Oregon demands that these improvements be made immediately …. Within the last eighteen months more vessels have crossed the Columbia river bar than had crossed it, perhaps, in all time past"Coast Survey Sub-Assistant A. M. Harrison, on November 29 1850, stated that the lighthouse should be located near the southern edge of Cape disappointment. This spot was about 250 feet above the high water mark and in position to avoid the fog bank that frequently covered its peak. This location was chosen because it had three-fourths horizontal view and they would not have to cut down some giant pine trees to the north.It was decided that supplies for building the lighthouse be brought ashore at Baker's Bay which is about 1,000 yards south and below the construction site. A trail already existed from the landing to the top of Cape Disappointment but a new road needed to be constructed in order to transport the supplies to the top.In 1853 a load of supplies for the lighthouse construction was being shipped into Baker's Bay. It grounded and broke up in the rough bar at the foot of Cape Disappointment. Building was finally begun after a second ship carrying supplies arrived in 1854. The 53 foot tower was finished along with the keeper's house which was a few minutes walk away.It was two more years before the lighthouse was ready and operational. The cost of construction was $38,500. The wicks which illuminated the lens were lit by the keeper on October 15, 1856. A fixed white light was displayed providing enough light for mariners. But the fixed light while voiding the need for the keeper to make frequent trips up to the top to wind the mechanism he still had to carry 170 gallons of oil daily up to the lantern room. A fog bell weighing 1,600 pounds was installed so as to give hearable warning as fog was a frequent visitor to the Columbia River mouth. In foggy weather when mariners could not see the light they could hear the bell. It would strike nine consecutive times every minute.Fort Canby was built nearby during the Civil War. In 1871 during artillery practice the fog bell was shattered. Seafarers complained that they could not hear the replacement bell. Another problem was that ships coming from the north couldn't see the Cape Disappointment light. To support their arguments for a better light they cited the wrecks of the Whistler (1883) and the Grace Roberts (1887). In 1892 a floating lighthouse was established at the mouth of the Columbia River four miles southwest of Cape Disappointment It remained there until 1909 when it was replaced by a 120 foot sail-powered ship which stayed for 30 years.In 1898 the 65-foot North Head Lighthouse was built about two miles north of the Cape Disappointment Lighthouse.Today in 2018 the two lighthouses are still operating. While the waters at the mouth of the Columbia River remain among the most treacherous in the world those two lights have made the navigation much safer than it otherwise would have been.
Posted by Laureta at 6:47 PM No comments: